WECOME TO THE MINTURN SALOON

The (un)offical end of the Minturn Mile & the Vail valley’s most historic restaurant. 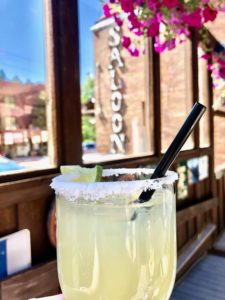 Located in the heart of the old railroad and mining town of Minturn, the Saloon’s building dates back to 1901. During the last one hundred years it has been, at one time or another, home to various taverns, restaurants and even back room gambling for railroaders. While the last four decades have seen the development of Vail and Beaver Creek resorts just seven miles on either side of Minturn, the town’s appearance and feel retains its historic Colorado roots. Minturn remains the true “hometown” of the Vail area.

Skiing Magazine has dubbed the Saloon “…the unofficial end of the Minturn Mile” for out of bounds Vail skiers. And because of this, on any given night in the middle of winter you might see innumerable skis and snowboards lining the outside of the Saloon. We are also proud to be named “the best après ski bar” in the state by Denver’s top magazine, “5280”. Not familiar with the Minturn Mile?.. Click here.

Owners Steve Campbell and Andy Kaufman have been in the restaurant business in the Vail area since the mid 1970’s and have operated the Minturn Saloon proudly since 1986. When they bought the Minturn Saloon, along with Bobby Pelz and Doug Newhouse back in July of 1986, “behind the scenes” renovations were begun. The recipes and menu were enhanced, the memorabilia collection expanded, and the kitchen improved. The Minturn Saloon is now considered one of the landmark restaurants in the Vail/Beaver Creek area.

The history of The Minturn Saloon

The Minturn Saloon building is one of the oldest structures in the town. The railroad and mining town of Minturn dates back to the 1880’s though this building was constructed in 1901. There was a fire in the downtown commercial section of Minturn in 1899 and this building is the result of the recovery effort. It has always housed a restaurant and bar, though it’s rumored to have provided additional uses! One retired railroader told us that as a child he served as a runner between the Saloon and homes in Minturn. The present bar room was then a private back room for gambling. Women were not as welcomed at the bar as they are now. So our friend would bring messages telling certain gamblers that their wives expected them back at home. The beautiful back bar in the dining room was built in the 1830’s in Missouri and arrived here after a stay in Leadville.

Jeff Taylor bought the restaurant back in the 1938. He was a sparing partner of World Champion boxer and Colorado native Jack Dempsey. When Vail was being constructed in the early 1960’s, “Jeff’s” was the place that everyone gathered after work to grab a cold one. Minturn was the only place in the eastern Eagle County with a grocery store, movie theater, and pharmacy.

Bob Cherry purchased it in 1976, and changed it to “The Saloon Across the Street From the Eagle River Hotel”. It quickly became know as “The Saloon”. At that time, the Saloon served three meals a day and had pool tables, pinball, and darts where the bar room is now. The old YMCA behind the Saloon had been turned into a dorm for ski bums called “The Wrong Side of the Tracks”. One of Bob’s goals was to turn a tough bar accustomed to weekly fights into a restaurant that ski tourists would want to frequent.

Bob had been a professional baseball player with the New York Yankee organization and fighter pilot in the Korean War. He put the original Saloon menus together featuring his love for game birds, ribs, and the tastes of Mexico. The first pieces of memorabilia to go up on the Saloon wall were of Bob’s baseball buddies and his good friend, John Wayne. The collection has grown over the years as more and more celebrities have enjoyed a night at the Minturn Saloon.

Andy Kaufman, Steve Campbell, Bobby Pelz and Doug Newhouse bought the Minturn Saloon in July of 1986. “Behind the scenes” renovations were begun, the recipes and menu were enhanced, the memorabilia collection expanded, and the kitchen improved. The Minturn Saloon is now considered one of the landmark restaurants in the Vail/Beaver Creek area.

It is the après-ski destination of “out of bounds” Vail skiers experiencing the “Minturn Mile”, considered one of the premiere out of area runs in North America. Outside Magazine calls the Minturn Saloon “The best ski bar in Colorado”. In March 2013 Men’s Journal issued a list of the “Best Après Ski Bars in the World”, and the Minturn Sallon was one of three American restaurants named to the exclusive list. Not bad for a joint not even in a ski area!

Esquire Magazine has named the Saloon to their “Best in America” list every year since 2007. AAA Magazine calls us “As homey and affordable as Vail is upscale, and typifies Colorado cuisine at its best.”

The Minturn Mile is one of the most famous “off-piste” or “out-of-bounds” ski runs in the world. It is accessed from the top of chairs 3 or 7 on Vail Mountain and then by taking the out of bounds access gate at the top of the turn on the “Lost Boy” trail. An ability level of upper intermediate or better is suggested to enjoy the experience. The Minturn Mile is made up of varying terrain beginning with bowl type terrain before proceeding into the trees. Midway down one will get to the “beaver ponds” where many people enjoy a break before heading on. The lower portion is affectionately known as “the luge”. It is essentially an old jeep road/game trail so it is fairly narrow in spots.

It is important to know that if you come down the Minturn Mile that you have left Vail Mountain and are in terrain that is not patrolled. If you have an accident you are on your own. Any safety rescue may result in financial charges for the person(s) being rescued. The Minturn Saloon does not encourage anyone to ski the Minturn Mile without full knowledge of the terrain and snow conditions as well as the responsibility and skills needed for “out-of-bounds” skiing. Anyone skiing or boarding the Minturn Mile should be prepared with the proper equipment, tools and accessories that one would take for backcountry skiing. You may unintentionally spend more time out there than you planned on! That being said, it is a great run and a wonderful experience best done with friends and ending at the Minturn Saloon for refreshments.

Check out a powder day on the Minturn Mile (SummitDaily)

Go to Top
Closed for Renovations

The Minturn Saloon is closed for renovations.
We will reopen in February 2023.